Forage Apples Around DC and Get Paid in Cider from Anxo

The cidery is recruiting the public to harvest apples, crab apples, and pears for its DC Estate cider

Even before Sam Fitz co-founded Anxo Cidery in Shaw, he’d cruise around DC looking for apples to forage for small-batch brews. Over the last couple years, enthusiastic servers and dishwashers have joined him in harvesting from neighborhood trees when the restaurant was slow. This year, though, the Anxo team is hoping to get the public involved in sourcing for its DC Estate cider. 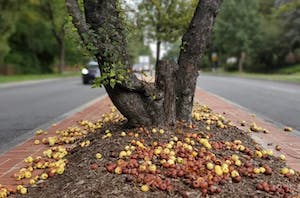 If you come across any apple, crab apple, or even pear trees in the DC area, email photos and the location to [email protected] From there, Anxo will supply directions for getting consent from the tree owners and instructions for harvesting. Bring the fruit to Anxo and get credit toward cider purchases (25 cents per pound)—plus first dibs when DC Estate is released in the spring.

In normal times, Fitz scouts potential apple-picking trees while out and about doing sales calls. But during the pandemic, he hasn’t left the cidery’s Brightwood Park production facility much. “Now I need everybody’s eyes and willingness to handle their little section of DC,” he says.

Right now is peak apple season, and if you start looking around, the trees are everywhere, Fitz says. Anxo will continue to collect apples through the end of October. Everything will then be blended together and naturally fermented in large wood casks. The result will be something similar to the fruity and funky “Happy Trees” cider, which is made with Mid-Atlantic heirloom apples and currently for sale.

Fitz doesn’t expect to make a whole lot of the DC Estate cider. (Only 15 gallons have been produced in each of the last two years.) Depending on what happens with Covid, the cider will be put on draft at Anxo’s Truxton Circle and Brightwood Park locations and make its way into a limited number of cans. Proceeds will go toward DC statehood initiatives.

“The greatest thing is finding these trees, and I’m just not out,” Fitz says. “I feel like people are doing more walking and trying to get outside. So as long as you’re being safe about it, it’s a good activity.”